15th-19th February 2010
I spent most of half-term week at Cathy's, and therefore had no access to the internet or bird services. This probably worked in my favour, not being tempted to go looking for the east coast Plover. I did however see the report of the Hume's (Yellow Browed Leaf etc etc) Warbler. With no further reports and little information, and in my infinite optimism, decided to check the Long-tailed Tit flocks around Whitlingham in case it had moved on. And I found it, and didn't tell anyone! Only joking. In fact the woods were pants, I still haven't seen a Goldcrest at Whitlingham this year. I did see 6 Goosanders, including a group of four males with their beautiful peachy glow. Kestrel & Stock Dove were patch year ticks. 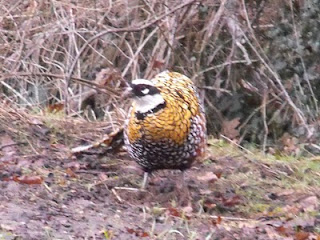 On Tuesday I decided to go to Strumpshaw to look for the warbler myself. Previous Humes in the county have gone missing for several days before being refound, so stranger things have happened. On the way down Low Road we stopped so I could photograph a Reeve's Pheasant. Loitering around the woods in the rain was largely unproductive, 3 Goldcrests and 2 Treecreepers were highlights of a sort. Retreating to the Fen Hide as the rain got harder, we were treated to a Bittern flying out of the reeds and off towards the reception hide. A redhead Smew, 2 Chinese Water Deer and 2 Water Rails were all good as time passers. Another quick look in the woods produced a second Reeve's Pheasant of the day. 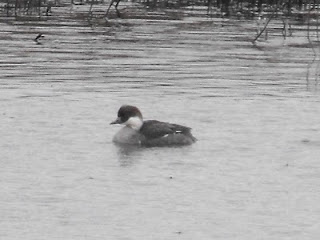 Wednesday was Cath's 21st Birthday, and therefore offlimits for birding. Suffice to say the Hume's wasn't in Chapelfield Gardens or Castle Gardens though. Thursday we went to Holkham to try and see that bloody Snow Goose, which unbeknown to me departed half an hour before we got there. It wasn't a total loss, I found my best bird of the holiday in the form of 2 Tundra Bean Geese in with c250 White-fronted and 41 Barnacle Geese. Cath found her first Firecrest, and the leucistic Pink-footed Goose was along Lady Anne's Drive. We also saw 2 Barn Owls & 2 Nuthatchs in the Hall grounds, plus a very early brood of 5 young Egyptian Geese. In his book "The Ecology of the Egyptian Goose at Holkham Park", Brian Sage lists only 2 occasions of earlier hatching, although it does only include data until 1997.
On Friday Gary was going to indulge me yet another Snow Goose hunt. We were driving near Ringland when his exhaust dropped off. The AA (not the alcoholics one) despatcher told us she wasn't very good reading maps, could we knock on some doors to find a postcode. With no reply on the nearest house, we found Merryhill Leisure Centre. "Looks like a nudist camp" I muttered, before a helpful receptionist gave us a postcode and seeing our binoculars, told us there were two Red Kites in the area. Thanking her, we returned to the car, and called the AA back. We then realised the postcode she had given us was wrong. Searching the internet for Merryhill, we found out that we had walked into the reception of a Nudist Camp, complete with bins. Whoops. The engineer found it very funny, telling us that he had "seen loads of birds over there, but it wasn't very pretty". It wasn't all bad, whilst we were waiting we had scanned a flock of finches and picked out a Brambling.
Driving carefully back to North Walsham with a tied up exhaust, we swapped cars and changed plans to a closer location. We walked through the magical forest of Waveney to have a look at the overwintering Rough-legged Buzzard. It performed admirably, regularly hovering whilst facing away, revealing the spread white tail. No sign of any owls or falcons, so we decided to spend an hour at Strumpshaw. More time spent along the edge of the woods but nothing more exciting than some Redpolls. In the Fen Hide we saw a ringtail Hen Harrier that had landed on the cut reed strips, and two Otters, a long overdue mammal tick for me. As the hail fell we walked back to the car.
Posted by James Emerson