As I was busy last weekend, Friday evening represented the first opportunity I had to try to patch tick the Ring-necked Duck for 2010. Unlike the previous week it looked like the light wouldn't be an issue, and I was positive as far as the Little Broad. Mist hung above the water, looking very picturesque, but oinous as far as birding went. From the jetty I could still see the far bank, so I walked as far as the island, but there the mist/fog* was so thick that I couldn't see anything more than a silhouette with cormorants sticking out of it. I walked back to the jetty, hoping to catch sight of a Bittern, one having been reported twice in January, but by now visibility was about 20m.
.
Trying to make something out of the trip, I went round towards the watersports centre to scan everything close in to the shore. I was rewarded with close views of the Red-necked Grebe, in a similar place to where I had seen it on its first day. As the light faded I waited along the edge of the Little Broad ditch, and was rewarded with views of my first Whitlingham Water Rail of the year, feeding along the broad edge.
.
* My understanding was that mist goes up and fog goes down (i.e. low-lying cloud). I later heard that the difference is solely one of visibility. I'm not really fussed either way, I just don't like leaving gaps for pedants to exploit.
.
On Saturday myself & Cathy got a lift down to the CP. The weather was gloriously sunny, but surprisingly about half of the broad was frozen over. There was a noticeably large number of GC Grebes condensed into the areas of open water. A couple of birders that I recognised but don't know their names told me the Ring-necked Duck was currently near the posts along the edge of the island, coinciding with another area of unfrozen water. Although sleepy, it obligingly kept its head raised, showing off the white eye-ring. In the same area was a redhead Smew, redhead Goosander and the 1st-winter male Scaup **. The GN Diver was also still around, but no sign of a Black-throat yet.
.
Following a walk up to the pumphouse, we then walked back along the south shore, click-counting the Great Crested Grebes. I clicked 49, my highest at this site by miles! Along the south shore the little hybrid goose (Lesser White-front x branta sp...maybe) that puts in periodic appearances was back.
. 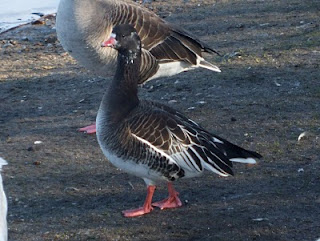 ** This bird was reported as Scaup, then as an Aythya hybrid, now everyone I've spoken to onsite recently seems happy it is a Scaup. I can't remember seeing a 1st-winter male Scaup before (probably because I dismissed any I have seen as hybrids ;-)), so am not in a brilliant position to comment.