1st May 2010
.
The first day of the Bank Holiday weekend, and showers were forecast. The inevitable compromise was to go somewhere fairly close, with hides, and Strumpshaw is that place. Me & Cath set off with the intention of spending a bit of time in the Fen Hide, as she still hasn't seen an Otter yet. Looking on the hide noticeboard, I found the RSPBs solution to the photographer-blocking problem - "if you have been in the hide for 15 minutes, please move on to allow others to use it". What? Don't get me wrong, I realise that something has to be done to prevent the hide being taken up for long periods by the same few people spread out, but this is silly. Ignoring the fact that it is uninforcable (unless a volunteer hands you a ticket as you go in and then calls your number 15mins later), how many birders would want to just spend 15 minutes in a hide?
.
"Are the Bitterns showing today?"
"Yes mate, one every 14 minutes"
"Thank goodness, I've only got 15"
"Yeah I know, oops, I'm 30 seconds over, got to dash"
.
Anyway, we spent just over an hour in the hide, although there was plenty of room for anyone braving the rain. The main attraction was a first summer Little Gull, which flew backwards in front of the hide for the whole time, showing the black upperwing markings and a faint pink wash to the breast. I picked up a Hobby, which eventually became three, and was remarking on hearing the Bearded Tits when one flew from left to right. We didn't see an Otter, the closest to one came when a GC Grebe swam across just below the water, creating a plausible wake until it popped up. Damnit!
.
We continued our walk round to the Tower Hide. A Cuckoo was calling across the river (presumably the edge of Wheatfen), and we quickly located it. Numerous warblers called from the trees along the river bank, and my first Orange-tip took advantage of a break in the showers to fly past and close its wings at the site of my camera. From the hide we saw a brood of Canada goslings, a few Pochard, Shelduck and heard a booming Bittern. As the rain increased, we walked back the way we came. On the way back a black Pheasant was in a field off Low Road.
. 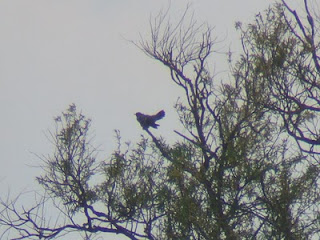