Finding the insanity line, and then crossing it.

8th May 2010
.
I decided in advance that I would get up at 4am in the morning and go down to Whitlingham. My logic was a sort of vague "I'll see more birds if its early" type thing. The weather was drizzly, hardly ideal for a dawn chorus, but I was up, so I went anyway. No sign of any owls, I once saw a Barn Owl along Whitlingham Lane and despite never seeing another one I always look out expectantly. The drizzle was persistent enough for me to abandon plans to do some counts, maybe I need to get some waterproof paper (does that exist?). All the birds you'd expect to be singing were, the pick probably being a Reed Warbler that was doing a slightly odd call (not odd enough to be Marsh though, unfortunately).
.
I finished my wandering around the Great Broad just before 7, and still hadn't seen another person, let alone a canoeist. Looking down the river produced a single Common Tern, rather than the swarm of Black Terns I had secretly hoped for. Similarly I didn't hear any Cuckoos, and even a walk around the ever-so-slightly pointless area that is Whitlingham Marsh failed to serenade my ears with a Grasshopper Warbler, or in dreamland a Savi's. My one and only notable bird of the trip was a pair of Bullfinches along the edge of the sewage works. Wet and somewhat demoralised I returned home.
.
That should have been the end of the days birding, were it not for some crazy fool calling me and offering me a lift to Cornwall. Figuring that I had the afternoon free anyway I went along, and seven and a half hours later I was queuing up to look over a tall gate and into the garden of England's most westerly birdwatcher. We saw the House Finch (which hopefully didn't escape from an aviary in Sennen) for a few minutes before the owners shut the gates. It was yellow and finchy. A quick look over the cliffs revealed a Gannet and a small party of Manx Shearwaters, and following that we headed back to Norfolk, arriving back in Norwich at 3am. To say I was tired would be an understatement. 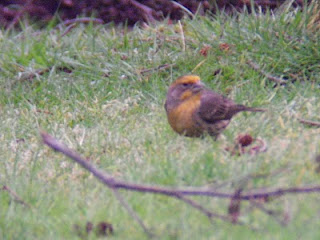 Picture courtesy of Gary White. Note the look of wildness of the bird.