3rd & 4th May 2010
.
Normally Whitlingham would be a no-go zone on a Bank Holiday, but as it was raining I figured it was safe. Adam came along and after a few short showers we arrived in moderate sunshine. The broad was covered by criss-crossing House Martins (96), Swallows, Sand Martins and 300+ Swifts. An amazing sight. It would have been even better if there had been a Red-rumped Swallow in there, but Suffolk are hogging those at the moment. We saw the usual warblery stuff around the back of the broad until we were alerted by the call of a Lesser Whitethroat. Up it popped, bird number 97. A few Common Terns were still around over the Great broad.
.
On Thorpe Marsh a Common Sandpiper was walking along the margins, whilst a Kestrel and a Sparrowhawk shared the skies. Whitlingham Marsh was rubbish, although the bypass was handy shelter from more rain. The sewage works was quiet, but a Rook (98) walking around the boundary fence, a ridiculously late patch tick. Not much on the way back, but with only two more birds to see, the champagne was on ice.
. 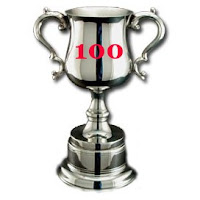 At work on Tuesday a couple of messages alerted me to Arctic Tern at Whitlingham. Adam confirmed one was still present, although spending some time over the river. I managed to get down in time, seeing my first Whitlingham Arctic Tern (99). I also saw flyover Grey Wagtail, CP Common Sand, Common Terns and some Whitethroats. What I really wanted was a brilliant and colourful bird for my 100th, a Bee-eater maybe, or even just a Blue-headed Wagtail. Predictably then it was a Garden Warbler (100), calling from a Hawthorn near the car park that brought up my patch ton for the year. Still, better that than remain on 99 for the rest of the year.
Posted by James Emerson