A Pratincole Worth Waiting For

15th May 2010
.
After a nervy week-long wait, the news that the Oriental Pratincole had stayed in Lincolnshire came as a great relief. Despite the relatively short distance from Norfolk, train coasts to Boston were huge, so I was grateful to get a lift from Gary & Claire. Cathy also accompanied us, as did Adam who had booked a day off work in case we saw anything new.
. 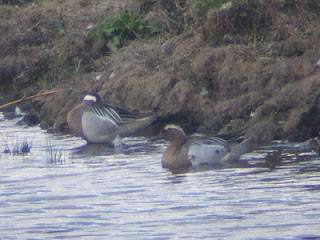 Before we went to Frampton we had to detour to Welney, as Gary's yearlist record could hinge on picking up highly mobile birds like the wandering Great White Egret. We checked with a volunteer outside, who confirmed that it was showing well from the Buxton Hide. We paused briefly in the observation hide to have a look at two male Garganeys, before walking down to Buxton Hide. Along the path Orange-tips were out in force, along with at least one Green-veined White and a Brimstone. Of course there was no sign of the egret, despite walking the half mile long Buxton Hide. We did see presumably injured Whooper Swan, feral Barnacle Goose and flyover Yellow Wagtail.
.
My first visit to Frampton RSPB gave a favourable impression. The vast expanses of marshland look excellent habitat, reminding me of Saltholme RSPB in Cleveland. There was understandably loads of birders on site, and I was greeted on the path towards the hides with the knowing words that this was a real bird, not like that House Finch. Can't disagree really. Further on I tried to figure out whether I recognised another birder, only for Jim to help me out with an introduction. He gave us some info on the best place to view from and other birds of interest on the scrapes.
.
Halfway round towards the East Hide we stopped and scanned, seeing a couple of Ringed Plovers and my first Temminck's Stint of the year. Walking into the East Hide I was immediately concerned by the fact that people were looking in different directions. It soon became clear that the bird wasn't on view, and had flown off 15 minutes ago. Surely it couldn't have waited all week, only to bugger off now? Luckily it hadn't, eventually the Oriental Pratincole flew back in and onto a spit. I didn't get on it as it came in, but after that it treated us to some close fly-bys in front of the hide, and enough resting to get good views on the deck too. My favourite Pratincole moment was probably seeing it run, the tiny legs making it look ridiculous and beautiful at the same time. As it moved round to the other side of the hide the sun showed off the red-chestnut underwing, and through a fluke I managed to photograph the wings showing the lack of a clear white trailing edge. Two down, one to go, as I still need to see Collared Pratincole. 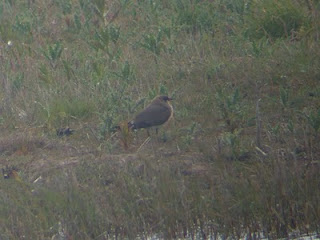 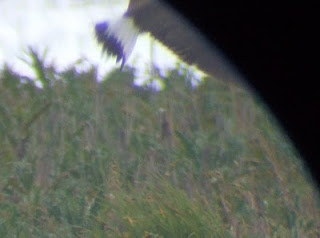 Whilst waiting for the Pratincole we saw five Little Gulls, several Yellow Wagtails and a one-legged Redshank hopping along. Outside the hide the clear water in the dyke allowed us to see Sticklebacks coming up to the surface, and worryingly for a bird point of view a Stoat bounded along the bank on the way back. A very nice reserve this, all we need is a cheap ferry across the Wash to visit it more often.
Posted by James Emerson