27th December 2011
Cathy was still ill, and politely disputed my notion that a good long walk in the fresh air would do her good, so we went out for a look at places with less than 5 minutes walking involved. First stop was Rollesby Broad, where a Great Northern Diver was floating along. It was distant, but still easily visible to the naked eye. Whilst watching it the bird didn't dive once, but did spend a lot of time with its head submerged. 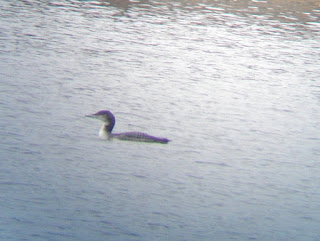 Next we went to Wroxham Broad, which presumably had been disturbed recently as there wasn't a single Aythya present. I picked out one Little Grebe and a Marsh Harrier hunted over nearby alder carr, but that was it. Deciding to try closer to home, we stopped at Old Lakenham Mill, where the semi-resident Little Egret was feeding in the river. A flock of apparent swans near Caistor St Edmund was actually 4 Mute Swans and 7 White Domestic Geese. Finally we went for a look along the river between Bawburgh and Marlingford, which was bird-lite.
Posted by James Emerson