17th December 2011
My first impressions upon arriving at Whitlingham were that it was going to be a quiet visit, but it actually turned out to be quite productive.  After a chat with one of the model yacht club members at the slipway I had a look in the woods near the car park.  Unfortunately it doesn't look like any feeders are being put up this year, which is a shame as they attracted good numbers of birds.  The reason is probably financial, but last year they did attract such large numbers of rats that the Pied Piper of Hamlyn had to be hired to get them out of the C.P, which probably was a factor too.  The best bird using the feeders last winter was a Nuthatch, but as it happened I heard one calling further along Whitlingham Lane, so hopefully this shouldn't affect my chances of seeing one here next year.
A modest number of ducks were on the Great Broad, but there wasn't anything out of the ordinary, or any interesting hybrids.  When I got to the river I scanned Thorpe Broad, and seeing there was a large number of Teal I set about scanning the margins to look for Green-winged Teal.  Whilst doing this I saw a female Red-crested Pochard, my first here this year and the third autumn/winter that at least one has arrived.  Carrying on to the conservation area bay I counted a flotilla of 90 Teal and a single sleeping Snipe.  10 Shoveler were on the Little Broad, and whilst watching them two Kingfishers flew through my field of vision, one chasing the other.  Finally I located at least five Lesser Redpolls in the alders, along with a mobile flock of Siskin. 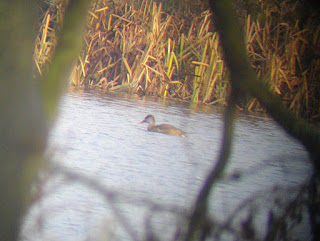 Thorpe Red-crested Pochard.  The red bill is a photographic artefact, it was only red-tipped in the field.
Posted by James Emerson