Of course it might not be my last visit of the year, if someone finds a Slav Grebe in the next few days, I'll be there.  But as things stand, with no change in the weather, my last few visits have been almost identikit, even including a very lazy Snipe that has been within a few feet of bank for over a week.  Today it was very windy, which made loads of gulls land on the water.  These counts, all very much minima include 450+ Black-headed Gulls, 200+ Lesser Black-backed Gulls, 160+ Common Gulls and 10+ Herring Gulls.  As the light began to fade I headed up to the farmland near Whitlingham Hall in search of one more species for the patch year list (Barn Owl, Red-legged Partridge or Yellowhammer were the ones in particular I hoped for), but without success.  Three heads poked out from behind a ridge in one of the fields, but slightly oddly turned out to be Mistle Thrushes.  So there we go, 106 for the year, a respectable total considering 2010 was boosted by the crazy spell that brought in all 5 grebes, GN Diver, Smew, Ruddy Duck and Ring-necked Duck.
Bring on 2012! 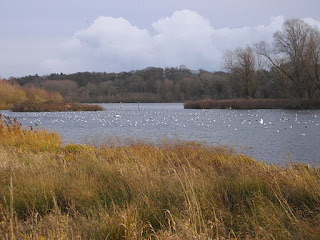