4th December 2011
The days birding started at Cley, for another look at the Western Sandpiper. The hides were busier than yesterday, but the bird was closer, so it was still worth the crowds. I got a few digiscoped pictures, which add nothing to any of the debates around the ID. Once the sandpiper moved further away we went to Teal hide. After scanning Pat's Pool my attention was drawn to a Shoveler in front of us. It was swimming backwards and forwards along the edge of the pool, regularly diving. It was making a meal of getting under water, the head starting low to the water then the wings thrusting down. I don't think I've ever see Shoveler do this before, but apparently it is noted in B.W.P. (thanks to Dave A for this info). 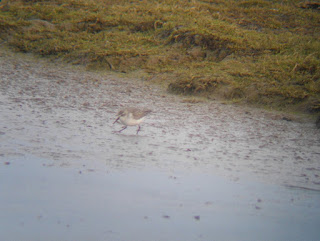 Is mincing a diagnostic feature? 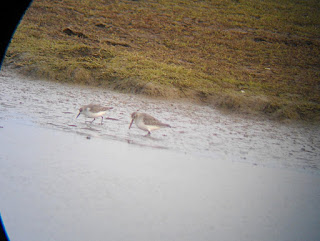 Size comparison with a Dunlin
Before leaving Cley, we scanned through the Brent Goose flock in the field behind the visitors centre. We found one Pale-bellied Brent Goose and these two returning leucistic birds. The photos undersell how pale they look in the field. It was now lunchtime, and we headed off to the Three Swallows for lunch. 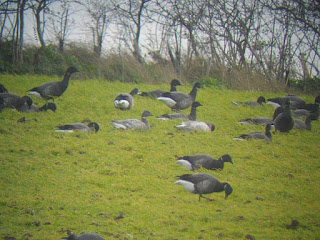 First stop after lunch was Blakeney. No sign of any wild geese from Friary Hills, but amongst the Blackbirds in a hawthorn was this tame, dark-beaked individual. Possibly a continental bird? 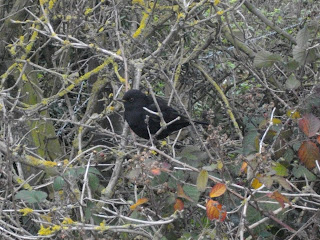 After Blakeney we went to Branthill Farm real ale shop for a stock-up, before having a look around the nearby area, finding a Great Spotted Woodpecker and a Common Buzzard whilst several skeins of Pink-footed Geese flew over. At around three we headed for Warham Greens, and upon our arrival the one birder already present put us onto a female Hen Harrier. Whilst watching this a Merlin flew through the telescope view, landing on the top of a small bush. A bit later a male Hen Harrier began to hunt, and at times was crossing over with the ringtail. Interestingly at one point they were both hunting in the same area, but with completely different flight patterns. Whilst the female flew level over the saltmarsh, the male was hunting in a series of semi-circular glides, creating a pattern that looked like an oscillating wave. As the light began to fade I picked up a Short-eared Owl gliding in from the east, completing an excellent days birding.
Posted by James Emerson