A productive evening spell at Thorpe, although I got soaked by a passing storm as soon as I had got there.  In a bright patch between showers the birds began to sing again, including a brief spell of reeling Gropper, about a month since I last heard one here. A Hobby flew over, which given the amount of sightings this year (compared to previous years) is presumably a bird on territory. Two Cuckoos were onsite, one already at Thorpe and one flying across from Whitlingham.  There wasn't any waders on the scrape or spit, but a Chinese Water Deer was doing its bit for scrub clearance by munching on a small tree. 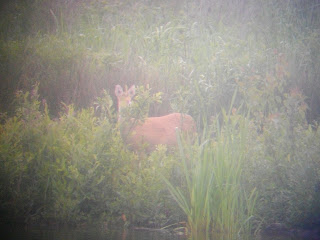