Last year we made three attempts to see this particular plant. The first two occasions we failed to find the only place in Norfolk that it grows. On the third attempt we found the location, but it had finished flowering. So it was rather pleasing to finally see Crested Cow-wheat for the first time. With the sun beating down, I took a few photos and then we headed back to Norwich to watch the Wimbledon final and have a BBQ. 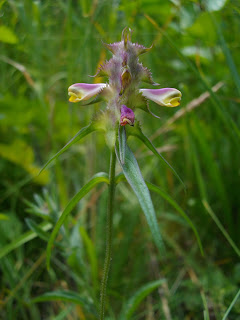