I tend to avoid Whitlingham at weekends when it gets hot, but there was no avoiding it today as I had the WeBS count to do. Whitlingham Lane and the car parks were all packed because there was Dragon-boat racing on, but as they were doing a couple of boats at a time it didn't seem to have had much of an effect on the already rather habituated wildfowl. On the slipway were several juvenile Black-headed Gulls. Not a plumage we get here that much, and I see that one further down the Yare has already been mistaken for a Red-necked Phalarope! 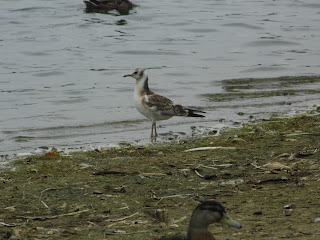 Wildfowl was pretty much as expected, 105 Mute Swan, 63 each of Greylag and Canada Geese (that being a reduction in Greylags from last month), 49 Egyptian Geese, 91 Mallard and 4 Tufted Ducks being the bulk of the count. Four Common Terns were also still present. Looking across to Thorpe a couple of Oystercatchers and four Lapwings were on the spit, that was about it.

On the insect front there was little dragon or damselfly activity, but a couple of Essex Skippers were a site tick, and there were also Meadow Brown, Gatekeeper, Ringlet and Small Tortoiseshells around. 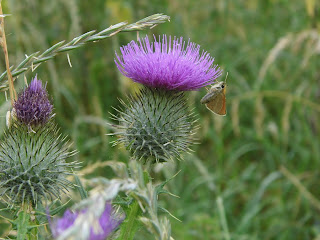