Today was WeBS count day, and Cathy came along to give me a hand. Wildfowl numbers are starting to build (although probably lower than usual for the time of year). The most notable count was 182 Greylags plus a white one. In terms of ducks there were 72 Mallard, 72 Tufted Ducks, 42 Gadwall, 9 Pochard and a Teal. Black-headed Gull numbers passed 200, and included a white-ringed bird that I have traced to a Norwegian ringing scheme. There was also a red-ringed Herring Gull that was too far away to read the ring - in the past these have been ringed as pulli in Suffolk (if you have seen a colour-ringed gull at Whitlingham and traced it's origins I would be very interested to hear from you). As we walked along the south edge of the broad Cathy found two Kingfishers, which uncharacteristically had flown past in complete silence. She also noticed an orange fungus growing on a log, probably Phlebia radiata. 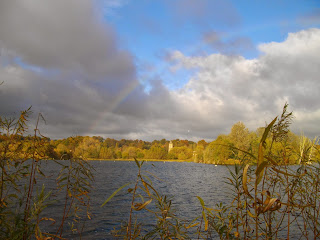 Rainbow over the great broad 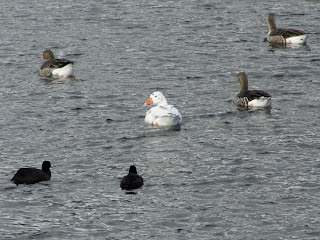 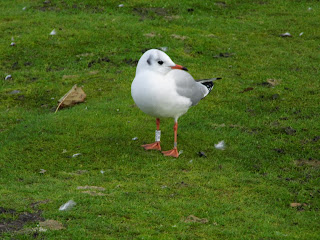