Happily for me the flock of Parrot Crossbills that has taken up residence at Holt C.P. was still present today, so Cathy & I went to have a look. If the Crossbills had chosen to spread themselves out over the country park then this would have been tricky, but as it happened they seemed quite content in trees close to the car park. For most of the time we were there some of the Parrot Crossbills (up to eight by the time we left) in a Larch, showing well albeit in bad light. We were able to watch them feeding and showing off the power of their impressive bills. 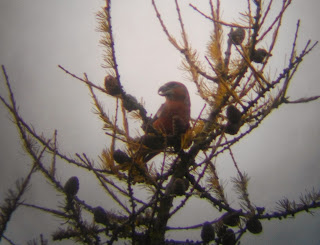 As it started to rain we headed back to the car, stopping off near the park giant to look at some fungi. There was a purple bracket (Trichaptum abietinum), Jelly Spot (Dacrymyces stillatus) and a Calocera sp. It looks like Calocera cornea, but as that species usually occurs on deciduous wood it may well be a related species. 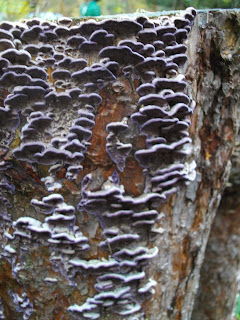 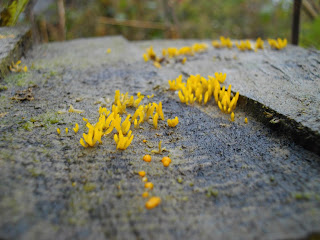