After my successful pre-Christmas jaunt to see Poronia punctata at Holt, I hoped to see the related species Poronia erici at Holme before going back to work after the Christmas break. Poronia erici is a rare, tiny species that grows on rabbit dung, making it particularly hard to find, even where it does occur. I had heard that it had been seen this winter, so thought it worth a go.

We woke to a hard frost, given the estate a rather belatedly Christmassy feel, but by the time we came to leave the ice had melted and been replaced by a dense fog. At the back of my mind was the risk that the hunt for rabbit pellets could descend into a foggy farce, but confident that it would be clearer at the coast we carried on. By the time we reached Brancaster there was no trace of the fog. At Holme we drove carefully down the bumpy track (we later saw Rob attending to the thankless task of patching up some of the potholes) and parked up at the end. The hut, visitors centre and café were all shut, although there were few cars so they weren’t missing out. In contrast the coast footpath was busy, albeit with some rather well-dressed walkers.

We walked along the edge of the pines, stopping briefly to look at some Collared Earthstars. Reaching the area where the Poronia had been seen a few years ago we set about checking the rabbit pellets, and immediately found a problem. The grassy areas were still frosted over, creating a threefold problem – many of the pellets were frozen to the ground, some were covered in ice and the white ice grains meant much more checking than in normal conditions. Cathy found an interesting small brown circle that could have been an old fruiting body, but having never seen pictures of anything other than pristine ones I couldn’t be sure. I’ve got used to getting funny looks from passers-by over the years, but Cathy was drawing funny looks as she turned rabbit droppings over with a stick, so after having a look at some Scaly Stalkballs we took that as a sign to cut our losses and head for Titchwell and a warm drink. 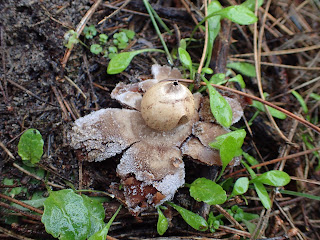 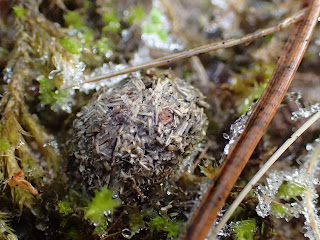 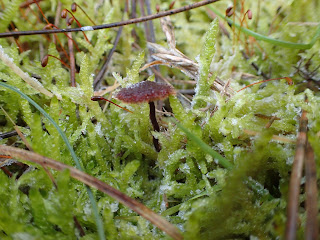 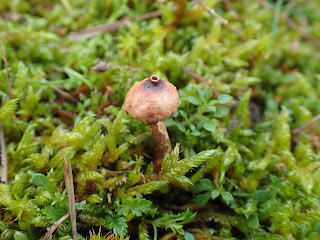 We didn’t spend long at Titchwell, but there was quite a bit of fungi on the path between the car park and the café, in particular a sizeable clump of Candlesnuff Fungus, a newly emerging Common Inkcap and some very early Scarlet Elf Cups. We then drove home through some of the worst fog I've had to drive through, which wasn't very pleasant. 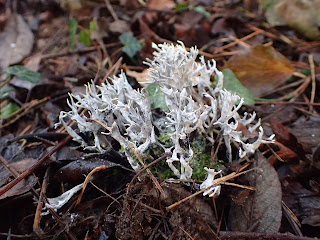 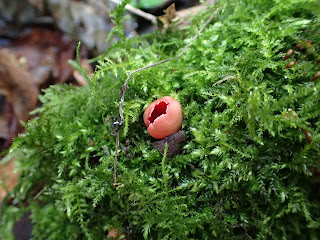