A lovely bright morning, so I nipped down to Whitlingham for a quick walk along the southern shore of the Great Broad. Arriving in the middle car park I could immediately hear Siskins, and there was a large flock of them in the willows and Alders between here and the Little Broad. Moving along I heard a Mistle Thrush singing, followed by several others calling. There were a few Black-headed Gulls on the slipway, but no ringed ones whilst I was there.

It was evident that both Coot and Tufted Duck numbers have built up nicely - I didn't have the time to attempt proper counts but at an estimate there was a minimum of 200 of each. There were still eleven Little Grebes, but they had split up, with two on the Little Broad, two near the observation screen and a group of seven in the bay. The Pochard x Ferruginous Duck was still present, accompanying the Pochard just west of the main island. A Brambling called from somewhere behind me. All too soon it was time to head back home. 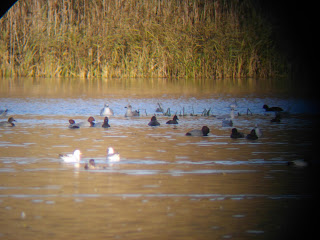