I had initially thought it likely that I would miss the March WeBS count, but as Rose was born early I was able to keep up my run of counts for a while longer. Stepping out into the cold gusty wind I wasn't completely sure that was a good thing. I reassured myself that the combination of cold conditions, strongly easterly wind and time of year meant there was a good chance of something unusual (Goosander, Kittiwake, Black Redstart for example), and with this temporary positive attitude and some thermal clothing I was ready to go.

Heading out of the car park I saw a Green Woodpecker fly up off the meadows and along the lane. Redwings called from the nearby scrub, and further round I got good views of one perched up. The Little Broad held low numbers but higher than normal variety, a drake Teal called from the other side of the dyke, and four drake Pochards swam about further out. Whilst counting the Black-headed Gulls I received a text to say that a Caspian Gull had just flown over the visitors centre, continuing a rather unwanted trend began by the Great White Egret that also flew over the visitors centre while I was elsewhere on site during the January count.

I began counting the Great Broad, hindered by the choppy water and gusty winds that would have blown the tripod over on more than one occasion if I hadn't grabbed it. Reaching the island I scanned the posts just in case the Caspian Gull had landed here (it hadn't). I then received a phonecall from Gary who was on the north side of the broad - two drake Pintail had just flown out eading eastwards along the broad. This could have been yet another saga, but fortunately I did see them later on, albeit only twice in flight, as they seem to like hiding in the reedy edges here. These were my first drakes following three females in previous years.

There were two avian highlights of the rest of my visit, firstly a male Sparrowhawk that flew into a nearby tree, apparently completely oblivious of my presence, and secondly a raft of 17 Shovelers feeding in the conservation area bay. For interest some selected counts (Little Broad, Great Broad and St Andrews Broad) were: 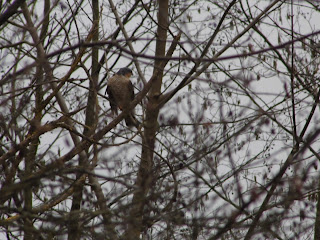 I completed my lap with no singing Chiffchaffs or anything like that, and the only excitement was provided by the finding of an orangey-pink crust fungus growing on a fallen branch. It turned out to be Rosy Crust (Peniophora incarnata), a common species but one I've not recorded here before. 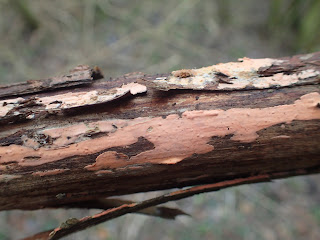