An hour at Earlham Marsh and a few slight detours on my way home from work comprised my wildlife experiences for the past ten days, but there are still a few things worth noting.

21st: Taking a slightly meandering route home I recorded several sites for Phytomyza ilicis, a fly that produces leaf mines in Holly. It is the only species to mine Holly, and the mines are very distinctive, being a yellowy colour that sticks out from a distance. If you check any large Holly you are likely to find it, but obviously being a bit niche not many people record it (in east Norfolk the majority of recent records are from two people, myself and Graham Moates). To illustrate this, firstly see a map of my Norwich area Phytomyza ilicis records, followed by the overall records. Of course it could be that lots of people have recorded it in the same place, but it seems more likely nobody else is doing it! If you would like to contribute to the dataset, the best way is to submit the record, with a photo, via https://www.brc.ac.uk/irecord/. 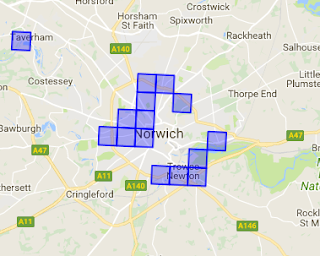 My Phytomyza ilicis records in the past two years 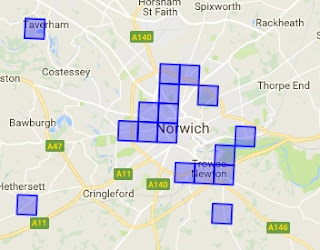 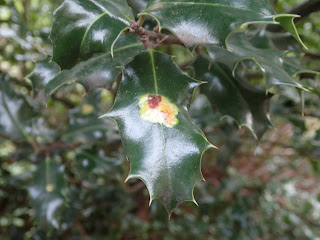 What to look out for

Another thing of interest on my walk home was a hedge made up of Cornelian Cherry (Cornus mas). I will be monitoring this hedge over the summer for the leaf mines of a moth recently given species status. Basically, Antispila treitschkiella was thought to mine the leaves of both Dogwood and Cornelian Cherry, however genetic research has found that there are actually two species, eahc specific to one foodplant. All of the Norfolk records of Antispila treitschkiella have been transferred to the newly named species Antispila petryi (i.e. the Dogwood eating one). This means that we should now be on the lookout for A. treitschkiella s.s. on Cornelian Cherry. The plant flowers now, making it best to find out where it is in the spring, but the leaves then grow and any mines will be early summer. 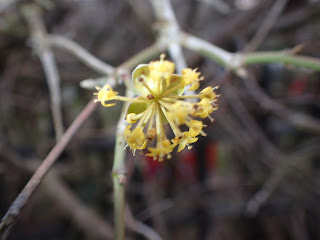 Cornelian Cherry flowers. It is a non-native species and most likely to be found in parks, gardens and arboretums.

24th: The sporadically appearing Norwich Glaucous Gull was seen again, this time on a roof near Earlham Marsh by Drew. Most of its previous appearances had been mid-week, so being a Saturday I headed down to Earlham Marsh, by which time of course it had gone. The flooded section of the marshes was looking excellent for birds though, and a drake Pintail (plus a minimum of 15 Shoveler) was good to see as I never saw one in the area when I lived at UEA or Three Score.