WHITLINGHAM: Watching the gulls go by

After a busy couple of weeks I headed down to Whitlingham on Sunday evening to watch the gulls flying off to roost. This is quite a relaxing thing to do, although it had a bit more purpose about it on this occasion as I was checking them out in the hope that the erratically appearing Norwich Glaucous Gull would be amongst them. Having had a look at the new pond dipping pagoda, I walked as far as the island I turned back to watch them coming from the city, all the while serenaded by a Blackbird singing from trees along the lane. A Green Woodpecker yaffled sardonically from the picnic meadow, seemingly not fancying my chances of seeing my target. 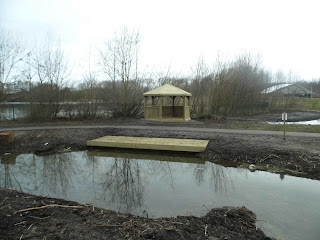 After a while the traffic noise from the A47 became just a loud hum in the background, a reminder that unlike a big grazing marsh the site sits properly on the border between urban and rural landscape. For some reason the period around dusk seems to fit well with this liminal atmosphere. A flock of a couple of hundred Starlings flew west with barely a murmur - presumably going to join up with a bigger flock for aerial manoeuvres. Most of the wildfowl was silent, save for the occasional frenzied honking of the geese. Jackdaws began to congregate on the far side of the broad - in the past few years a roost of hundreds has established itself on the main island. As the evening wore on they rose and chacked loudly, spiralling over their favoured tree like a Hitchcockian Buckenham-lite. 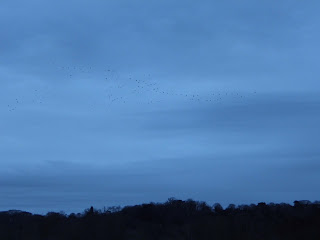 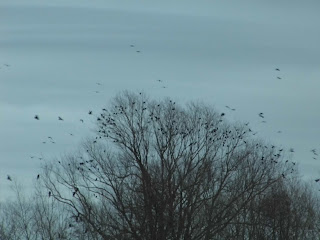 Despite these sensory diversions (and some interesting bands of cloud) I was mainly concentrating on the gulls, which tended to be passing over in bursts. I let the ones that were slighlty behind me or too high to see well go, but tried to check out the rest, particularly the ones that looked larger than their flying companions. These were typically Herring amongst the Black-headed Gulls, and after a while I headed back to the car. The light looked good for a Barn Owl to be out, but it was not to be. 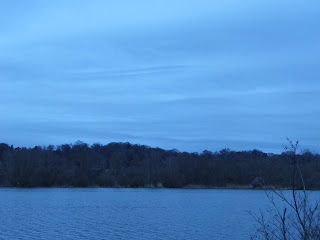