Other commitments have meant few days out birding this autumn, so it was a pleasant surprise that on the day before an arranged trip to North Norfolk with Adam that a Brown Shrike had been found at Weybourne Camp and the presumed Stejneger's Stonechat was still present between Salthouse and Kelling.

Having both seen the long-staying Brown Shrike at Staines a few years ago, both Adam & I were most interested in the Stonechat, so we headed straight to Salthouse and parked up by the duckpond. Whilst there a message came though to say there had been no sign of it, but we walked down to Meadow Lane. It only took a couple of minutes to locate the 'Eastern' Stonechat - perhaps we just got there as it was waking up, or the observers present were looking in the wrong place. Whilst it stayed mostly distant, the gusty wind made it hang in the air, showing off the rump and underwing nicely. 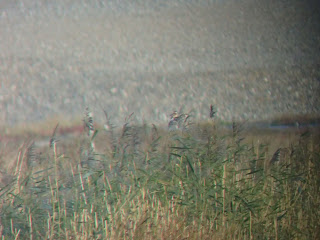 After a while we moved on to Weybourne, where the news was progressively less optimistic. Birders walking back had been present from dawn and not seen the Brown Shrike. The next few told us that access to the camp wasn't possible today because of activities in the compound, and finally we found out that Moss Taylor had conducted a thorough search of the area and it appeared the bird had definitely moved on. We switched our attention to the sea, where there was a good passage of distant auks, Gannets and Red-throated Divers, but not much else.

We had time to visit one area to look for migrants, so decided to spend the time at Gun Hill. The lack of thrushes on our way out to the dunes didn't bode well, and there were very few birds at all in the scrub - a 1st-winter Reed Bunting and a Whinchat were the only things of note. As we headed back eastwards Adam stayed in the dunes whilst I walked along the dune edge, hoping to find Dune Cup fungus. I didn't find any (they had probably been covered by loose sand), but we did see quite a bit of other fungi, including Dune Stinkhorns. 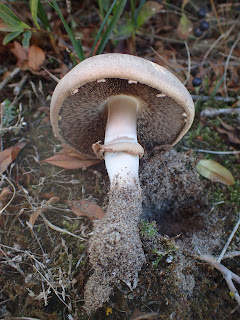 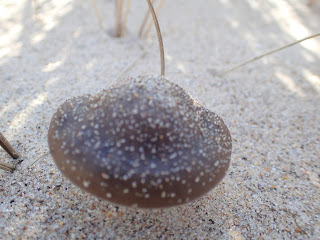 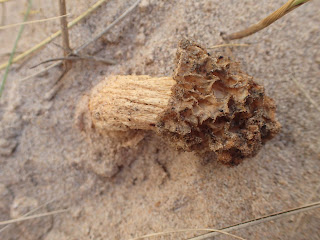 Spotting a plank of wood I decided to check under it to look for specialist woodlice and beetles. This was half successful, as the woodlice were all the ubiquitous Common Rough Woodlouse and Common Pill Woodlous, but the beetles were beach species, Broscus cephalotus and Aegiala arenaria. We stopped off on the way home at a location that has held Tree Sparrows in the past, but a house renovation and some scrub clearance means that sadly the area is no longer suitable for them. 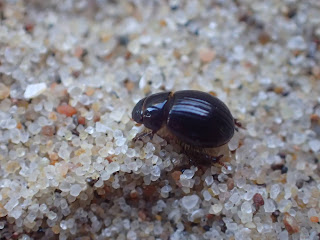 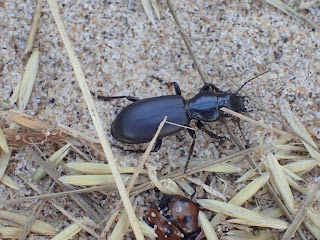