Despite spending quite a bit of time during the autumn looking for fungi, I don't get round to going on many public forays anymore. Tony Leech was leading one at Holt C.P. for the Norfolk Wildlife Trust. Cathy & Margaret came too so Rose could attend her first foray. It had been ages since I had been to the CP via the Hempstead Road entrance so I had forgotten that bit was hilly, making for some interesting buggy-pushing (which didn't get any better on the gorse-laden Lowes), but we did see a good range of fungi to make up for any diffculties.

One of the highlights was the range of boletes seen, 5 species in all including Scarletina Bolete (the commonest of the ones with bright red pores instead or yellow), Peppery Bolete and Mottled Bolete (which bruises a bright greeny-blue at the base). We saw quite a bit of Nail fungus (Poronia punctata), although at a stage where the black specks on the surface weren't visible. Unfortunately I didn't photograph the one species that was new to me, Burgundydrop Bonnet, as I didn't realise at the time that I'd not seen it before. 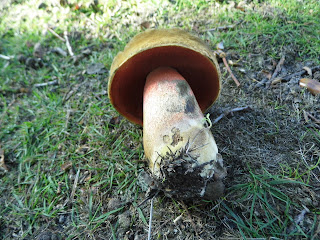 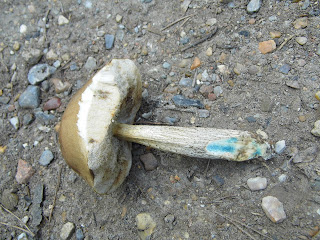 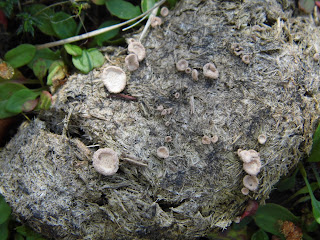 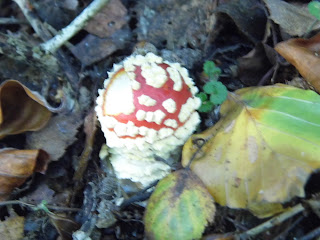 Afterwards we headed to Natural Surroundings for lunch, which was great as always.
Posted by James Emerson