On Saturday I helped lead the first of two fungus forays for the RSPB at Strumpshaw Fen, buoyed by the recent wet weather that has caused a lot of fungi to emerge of late. I had a few minutes spare before the start so went for a brief wander, finding an old Alder Tongue gall in the car park, some Pavement Mushrooms beside the path and an occupied Stigmella catharticella mine in a Buckthorn leaf. I had hoped to find leaf mines of the sawfly Heterarthrus ochropoda in some of the Aspen, but had to settle for mines of a different sawfly, Fenusella glaucopis instead. Although an Osprey and Great White Egret were still present in the area somewhere, neither were on view which was a shame. 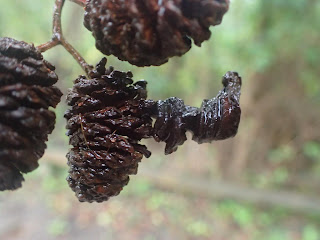 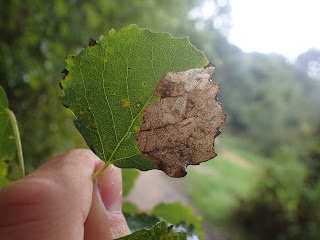 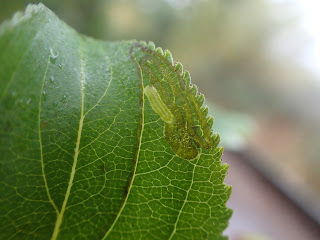 Numbers for these walks are capped at 20, and we had around 15 for this one. After a short introduction I showed participants the species I had found already, along with the large numbers of Slender Club fungus that grow in the leaf litter beside reception hide. We then made our way slowly towards the base camp, stopping to look at some now rather old Golden Scalycaps, some Blue Roundheads and quite a few Agaricus, which puzzled me at the time but I now think were Inky Mushroom (Agaricus moelleri). 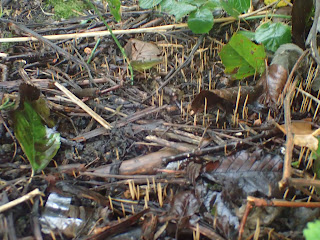 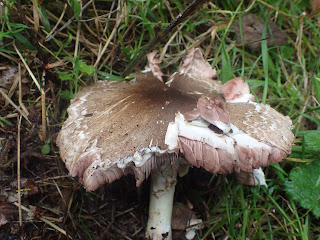 The base camp area is always good for fungi, some of which come up every year, but there were a couple of new ones on this foray. Firstly Fluted Birds-nest, a lovely species although most of the 'eggs; had already been destroyed by the rain, and secondly Freckled Dapperling, which was growing under one of the logs and looked like a large inkcap until removed and examined. Further along we also saw a Skullcap Dapperling, having also seen Stinking Dapperling so a good day for the Lepiota spp. 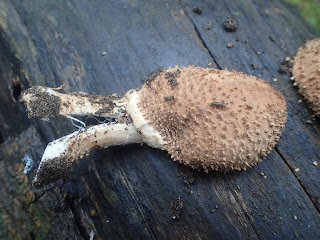 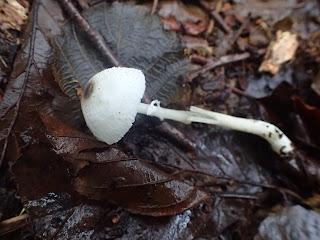 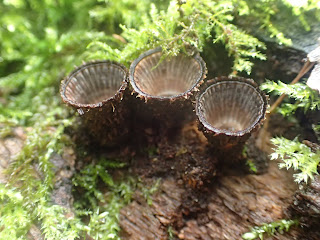 Progress was slow due to the shear number of fungi being found, but we did progress into the woods, seeing the Upright Coral fungus that was found last year and smelling a Stinkhorn somewhere out of site. Heading further towards the edge of the reserve we saw lots of Amethyst Deceivers, and then as the path turned a corner some Fly Agarics. We'd not recorded this crowd-pleasing fungus on the forays before, so it was great for everyone to see them. 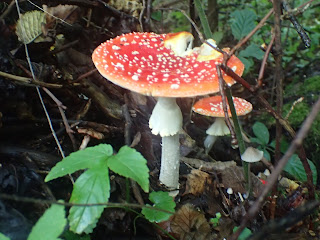 There wasn't time to go quite as far as normal because of the amount we had already seen, but we did visit an old Hazel tree where once again Spring Hazelcups were fruiting very early! On the way back we saw some Shaggy Ink Caps just starting to open up beside the path. In total we recorded about 50 species, with quite a few more of the trickier species not identified beyond family or genus, so quite good going. If any readers were present and want a list of species seen then get in touch and I will send you a copy. 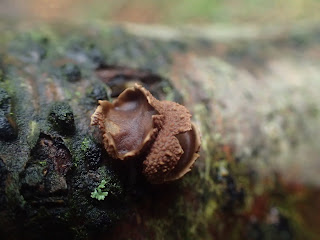 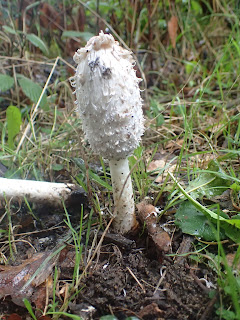