20th June 2010
.
Father's Day in the Emerson household tends to involve a walk in the morning and then a family meal. With dad having no preference as to where we went, I suggested Cley in the hope that the Chilean Flamingos were still present. Whilst accepting they are probably from the Dutch/German feral population, I would presume that it is not self-supporting and have no illusions as to their BOU eligibility, but still thought that flamingos in a wild setting were well worth a visit. As it was, the pair were visible from the car park, and showed brilliantly from Bishop's Hide, feeding constantly around Pat's Pool. We spent an hour or so on the reserve but saw little else of note with the exception of an adult Spoonbill on Whitwell Scrape. The leg tags were orange-yellow-orange if that means anything. It was behaving like a typical Spoonbill, in that it was asleep for 99% of the time.
. 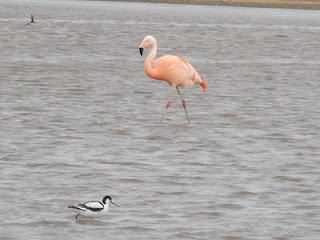 .
For lunch we went to the Greens on the outskirts of Aylsham for a carvery, which was excellent as ever. Having foolishly agreed to attend a surprise 90th birthday party in the evening (anyone else think this sounds like a dangerous idea?) I had the afternoon to kill in North Walsham. I had a walk around Pigney's Wood, seeing little except my 2nd Red Admiral and 1st Speckled Wood of the year. I was puzzled to not be able to find the hide, until I noticed a clear rectangle of ground and scorched trees. Presumably arson, I'll add that to my book of reasons why I don't like people. Incidentally I can't remember seeing a good bird from the hide, but it did contain the sightings book, so thats years of records gone. A walk around Witton Woods was notable only for a family of Coal Tits, the party went off without a hitch at the Poacher's Pocket (no seabird passage visible to the naked eye from the pub either) and a Buzzard flew over the road near Ridlington on the way back.
Posted by James Emerson