Having not been up to the North Norfolk Coast for a while, me & Cathy got a lift to Cley. Just past Hevingham village we almost saw a Peregrine sitting on an aerial - a second look showed that it was a model decoy. We had a quick stop at Salthouse, sitting in the car and watching the Snow Buntings and Turnstones feeding close by on the raised bank. In the fields nearby thousands of Pink-footed Geese were feeding and wheeling overhead. 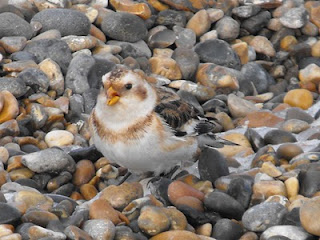 Snow Bunting, taken at Salthouse last January
It started to drizzle, so we sat in Bishop's Hide for a while. We didn't see anything out of the ordinary, mostly Wigeon, Teal, Shelduck, Black-tailed Godwit, Ruff, Dunlin and Golden Plover. A Sparrowhawk flew in and perched close to the hide, just out of view of my viewing slot. Instinctively I moved my head to try and see it, banging my head in the process. Damn hides. Walking towards east bank Margaret twisted her ankle on the slippery mud, and after some persuading went back to the car to rest it. Cathy & I continued to east bank, but a combination of high winds and the lie of the land meant that we failed to find the American Wigeon. A quick check on Arnold's Marsh revealed loads of Dunlin and a scattering of Grey Plover, and four Little Grebes were in the storm drain.
Posted by James Emerson