WHITLINGHAM: Week 3 - The day of the joggers

16th January 2011
.
Some days the birding gets better and better, but today peaked with the first bird seen on the patch - a male Blackcap. Having never seen an overwintering one until 2008, this was my third in the last three years. It was in scrub alongside the river at Thorpe Meadows, which were flooded. A flyover Pied Wagtail was also a patch year tick.
.
Whitlingham was ice free, which made a nice change. The large number of cars on Whitlingham Lane suggested some sort of watersports, but it turned out that most of them were joggers. Not as annoying as canoeists or irresponsible dog owners, but it is a little bit annoying having an army of brightly-coloured people running at you repeatedly. Sometimes I wonder if I've always been this grumpy or whether its developed over time. Anyway, nothing out of the ordinary on either broad, although notable increases in Teal and Shoveler numbers. The Yare Red-necked Grebe has clearly decided to sit at Rockland instead of checking out Whitlingham. Leaving the country park I walked up the lime avenue and past the old hospital, adding Stock Dove. The short grassy area near Trowse Woods held its regular Green Woodpecker, but the wood itself was quiet. 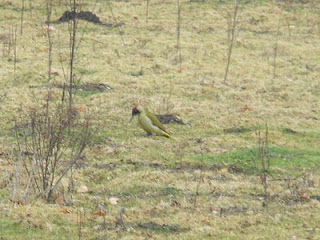