8th January 2011
.
New Year's Day had been a bit bird-light, so my main aim for today was to catch up with some of the commoner stuff I missed then. A night without a sub-zero temperature meant that there was also the outside chance of a Smew or something. As I walked along Whitlingham Lane in the drizzle I racked up Pheasant, Redwing and Jay, whilst 115 Greylags were on the meadows. There were only a couple of Siskin in the Little Broad Alders, but while looking for them I found a Treecreeper. Walking to the east end of the Great Broad, I immediately picked out a Red-breasted Goose with the Mallard! It was clearly an escape, and a rather tame one (it began swimming over to me like it wanted a hug, but its Mute Swan bodyguard were having none of it). Figuring that other local birders might still be interested in seeing it, I texted the news in. I can understand most people not caring, but some can enjoy watching birds regardless of their origins. I thought seeing last years Chilean Flamingos at Cley was rather excellent for example. 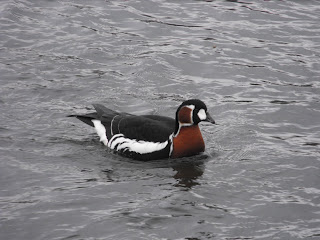 Moving on I saw that the bird feeders near the car park had been filled up. A short stakeout and I had seen the Nuthatch and a Marsh Tit, whilst four Brown Rats were eating the spilt seed. I located the missing Siskin flock along the south shore of the Great Broad, mixed in with some Goldfinches and a couple of Lesser Redpolls. No new wildfowl on the broad to speak of, a Little Grebe and some Shoveler the pick of the bunch.
.
Continuing my trip around the patch I walked through the woods, hearing the third of four unseen Great Spotted Woodpeckers. I looked over onto Thorpe Marshes but there wasn't a Lapwing in sight. I did get to watch a flock of Redwings in the scrub near the river, which is always a pleasure, and a Marsh Tit was calling like a Great Tit. Whitlingham Marsh was rubbish as always, and nothing rare was lurking on the river. Even the sewage works was quiet, just a couple of Jackdaws around the stirring containers. Cathy met me back at the car park to say "aww" at the goose, and that was it for another visit.
Posted by James Emerson