16th February 2012
As a change from Whitlingham I went out to the west of the city.  Starting at Colney Gravel Pits I had a scan for Smew or anything out of the ordinary, but saw nothing scarcer than Teal.  Walking back along the road I then went onto Bowthorpe Marshes. On the river a Little Egret briefly raised my interest (a Great White Egret was seen in the area earlier in the week), but having thought about it Little Egret is still a decent bird for this area.  Two out of the three large pools that I used to come and sit near when I lived at Three Score were completely dry.  Further along at Earlham Marshes I found a Water Rail in vegetation along the river edge and a couple more Teal.  Just before reaching Earlham Park I found a Kingfisher perched up, but it then shot off as I reached for my camera.  Final decent of my walk was a Nuthatch, calling from a tree near St Mary's church. 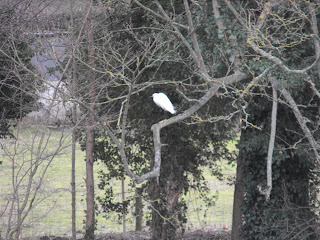