14th February 2012
Rather than visit Whitlingham today I decided to have a walk around the Thorpe side, and it paid off nicely.  Scanning the scrape from the cattle compound I picked up a Dunlin, my second new patch bird in under a week.  I watched it feeding along the back edge with some Lapwing before it disappeared behind the rushes.  From near the path a Water Rail called.  Near the nyjer feeder a Greenfinch and a couple of Jays were in the bushes, a noisy flock of Siskins were in the railway line Alders and a few Snipe flushed up off the marsh.  From the bird screen I noticed a redhead Goosander serenely gliding around the spit.  I let Ricky know, and it turned out this was a patch tick for him.  I kept on it until he arrived, which turned out to be just in time as a minute later it did a vanishing act, although its presumably still nearby.
If anyone is interested, the NWT are running a "family fun day" event here on Wednesday to celebrate their leasing of the site, so attend or avoid as you see fit. 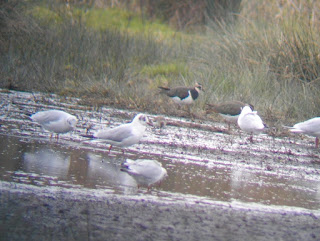 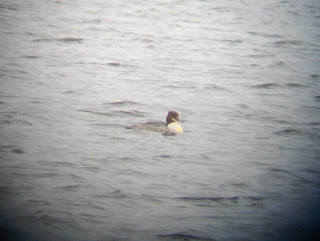