I went to Thorpe Marshes this morning in the hope that the hot weather would bring out some raptors.  Along the ditches lining the path to the marsh were number of Large Red & Common Blue Damselflies, as well as two Hairy Dragonflies.  I didn't really expect to see any waders on the scrape, but immediately noticed a medium-sized wader working its way along the mud.  As it was silhouetted I had to reposition to get a better look, enough to see that it was a Redshank, a new bird for the year and only my third patch record.  Further round there was a welcome return for two Little Ringed Plovers and a couple of Lapwings.  This spell of birds was completed by a Hobby, which flew in and hunted over the marsh before flying back eastwards, and a pair of Sparrowhawks, including a particularly large female. 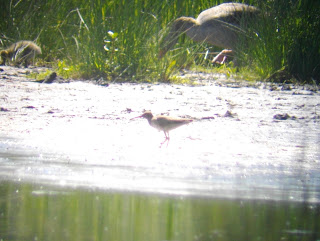 I had a look around the Bungalow Lane area (I'm still hoping to see Marsh Harrier this year) to no avail, then moved onto the bird screen.  One Common Sandpiper was walking along the edge of the spit.  Further round I scanned the rest of the bare shingle spit, and found another six!  This is my second highest patch count, following a flock of eight Common Sandpipers along the river in 2010.  On my way back along the riverside path a pair of Linnets flew between the small trees.  Before leaving I had another scan over the woods, and saw a Common Buzzard soaring up in the distance.