With the good weather continuing, we decided to go to Foulden Common to catch up on some butterflies.  On the way we got close up views of a Muntjac standing just off the road, and numerous Orange-tips were flying.  On first glance the common seemed rather devoid of butterflies, with just a couple of Brimstones.  A look at the gorse that had held Green Hairstreak last year paid off with a Holly Blue, and we also saw a couple of bright Small Coppers.  Another butterflier had located a Grizzled Skipper, which quickly flew off, but Cathy located another, and as the sun came out we found another three.  We didn't see any Dingy Skippers, but it was suggested that both species were late emerging this year (it turns out that one was seen on Saturday - but its quite a large site to track down one small brown butterfly!) 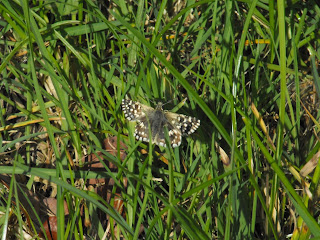 Grizzled Skipper.
Better than last years effort, but nothing I could do about the grass in front of it.
Posted by James Emerson