Being in the very unusual situation of having a sunny evening, I decided to get to Whitlingham rather than wait for the weekend.  There was still a gusty wind blowing Swifts backwards and forwards over the broad, unfortunately none of them white rumped (even abberantly).  There were far less Swallows about too, dismissing any remaining hopes of a local Red-rumped Swallow for the moment.  A brood of young Moorhens were on the slipway, but soon walked off towards cover.  Walking around the conservation area there was a reasonable amount of birdsong, but most from deep within cover.  One Garden Warbler was the pick of the bunch, whilst a Kingfisher flew unseen down the river. 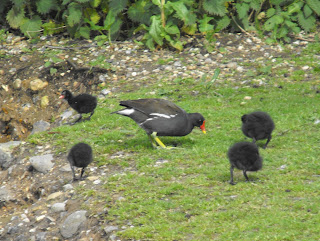 On the broad itself two Common Terns were flying around near the island, but otherwise it was very quiet.  A scan of Thorpe produced lots of House Martins, but little else.  The sun came back out from behind a cloud and encourage a Buzzard to soar up over Whitlingham Woods, pursued doggedly by a Carrion Crow, but the Jackdaws decided it wasn't worth mobbing and left the crow to it.  I left the broad to walk over the picnic meadows (still hunting for that elusive Mistle Thrush!) and found a Green Woodpecker and some Meadow Saxifrage.  In the woods near the carpark a Great Tit flew out of one of the nest boxes.  Most of these (and the bat boxes) have been broken into by woodpeckers, so good luck to the Great Tits in breeding and raising their brood.
Posted by James Emerson