Happy New Year. As a Red-necked Grebe had been reported from Whitlingham the previous evening we went down there late morning to have a look for it. A flock of grey geese with a white one in the middle would be promising if seen at the coast (Pink-feet with Snow/Ross' Goose), but on the meadows south of the country park it was predictably 76 Greylags with a white Greylag. Scanning the Little Broad we saw a flock of c200 Gadwall, but no sign of last weeks Shovelers. Pochard and Tufted Ducks were showing well on the Great Broad, but there was no sign of yesterdays Grebe. On the slipway we saw a white-ringed Black-headed Gull, which turned out to be the same Oslo-ringed bird we saw here in November. 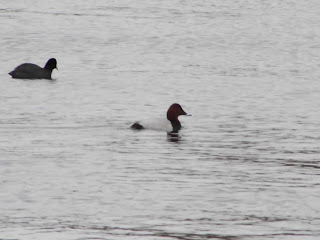 Before heading off we went into the visitors centre, where John was discussing my blog. We had a good chat, during which it turned out that someone had reported a Red-breasted Merganser to one of the staff today. There has been a couple previously but they remain a rare bird inland, so we went back an had another scan of the Great Broad, but without success. If anyone does have details of this bird (or the Red-necked Grebe) then I would be interested to hear about them. 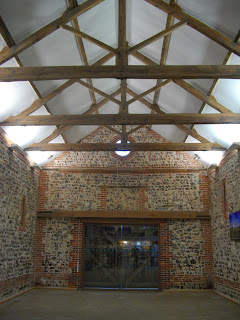 Inside Whitlingham Barn - this end has been emptied out until a new cafe is put in.

By the time we left it was starting to rain. Deciding that Breydon Water wouldn't be a good idea, we had a quick look at Rollesby and Ormesby Broads, seeing a couple of Shoveler and a Teal at the latter, before doing a loop to Horsey and then home via North Walsham.
Posted by James Emerson