The weather on New Year's Day had been quite poor, so I decided to go back today and have a better look round. I walked down in order to ensure that anything I did see would count on my 'Foot It' list (January's birding competition to see how many species you can record on foot from your home). This seemed like a mistake as it began to hail, followed by fairly constant rain.

Along the Little Broad shore I kept an eye out for Water Rails, but didn't find any. Scanning the broad I counted 214 Gadwall and a lone Shoveler. Around 150 Tufted Ducks and 30 Pochard were on the Great Broad, along with a single Goldeneye. Teal were tricky to count as they were up on the island, but there were at least 20. I scanned across to Thorpe and the shingle spit was thick with Snipe, a minimum of 16 were visible along the broad edge. A Green Woodpecker and five flyover Lesser Redpoll completed the avian interest for the trip before I returned home to dry off. 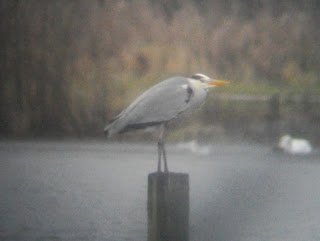 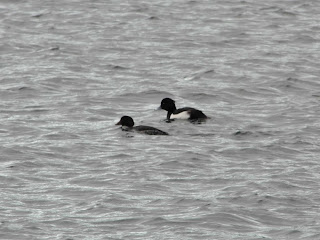