Having failed to see the Hume's Warbler at Waxham on the previous weekend, I was keen to revisit and give it another look. Adam had also been unsuccessful, so I agreed to head back to North Walsham on Saturday morning to pick him up then head to Waxham. I had a quick poke about in his garden before we set off, noting Stigmella anomalella mines in a Rose sp and more interestingly feeding signs of a Psychoides moth sp on Polypody ferns. 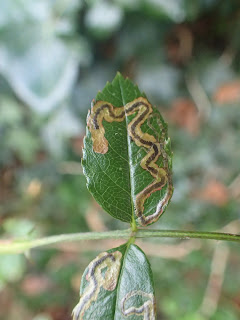 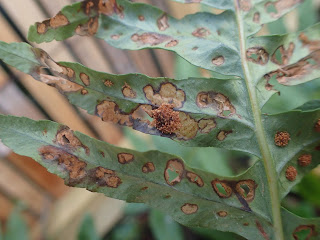 At Waxham we noticed a small group of birders looking into the Shangri-La garden. The Hume's Warbler had been seen there earlier in the morning, but there was no sign of it now. Deja vu began to creep in. Some people on Twitter had given me up-to-date information, which suggested that it was mostly favouring the area south of the garden, was calling very infrequently and was feeding low down, so we decided to search the areas of Alexanders along the coast footpath just south of Shangi-La.

After about 45 minutes with no sight or sound of the Hume's Warbler we retraced our steps and decided to try a bit to the north. A small group were looking intently into the ivy covered trees in a way that suggested they might have seen it, but they hadn't. After searching theare just north of the chalet we turned round and returned to head back to the area we started at. This time we got lucky, as a tour group had located the Hume's Warbler. It called and flew past us, and after a quick move along the path we got nice close views of it in some Alexanders before it flew up into the trees. Another call and some more good but brief views and it then vanished again.

Leaving Waxham we decided to call in at Happisburgh where a flock of Shorelarks have been frequenting the area around the lighthouse. The large field seemed to hold hardly any birds, although a Meadow Pipit was new for the year for me. Whilst Adam scanned the field I looked out to see, seeing two Red-throated Divers flying south. Further along we met Gary & Alysia, who also hadn't seen the Shorelark. After a catch up we continued on, seeing some Skylarks and a Stonechat. On the way back I noticed four Snow Buntings on the beach, suggesting that the Shorelark might have also been somewhere out of sight along the shore.

On the way home we saw drive-by Turnstones at Walcott and a Sparrowhawk over the road between Edingthorpe and North Walsham.
Posted by James Emerson