Adam & I decided to do a leisurely bit of birding along the Wensum valley and north-west of the county. Our first port of call was Sparham Pools, and here it became apparent that the previous night had been colder than we thought, with the edges of the lake still frozen. Walking along the perimeter we saw a large flock of Fieldfares in an adjacent field, and I heard my first drumming Great-spotted Woodpecker of the year. There was no sign of any Goosanders, a few Shoveler being the most interesting birds on the lake. Something brown moving across the ice caught our eye, but it turned out to be a bunch of leaves being blown steadily across the ice!

Our next stop was at Guist, where a few Greylags and Egyptian Geese were in the fields near the river. We stopped again near Choseley, where the fields were full of Brown Hares and Lapwing, which was good to see.

Arriving at Titchwell before lunchtime we walked along the path from the car park and stopped to look at some fungi, including Alder Goblet (Ciboria caucus) and Scarlet Elf Cup (Sarcoscypha austriaca). A large flock of mostly Chaffinches also included at least two Bramblings and some Greenfinches. They were coming to the feeders then flying down to the ditches to drink. 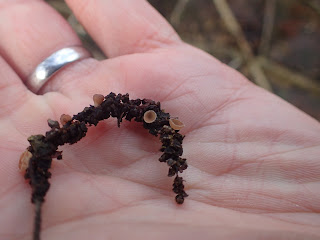 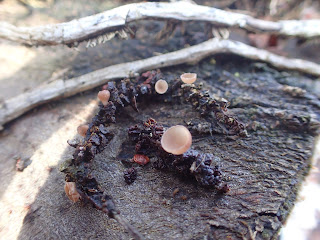 The water level was high on the freshmarsh, but there was a group of Avocets in addition to the ducks and Brent Geese. On the todal section there were lots of Redshanks, but when we returned they had been joined by a large flock of Knot plus some Dunlin and a Ringed Plover. On the beach we saw Bar-tailed Godwit, Grey Plover and Sanderlings, with Goldeneye, Common Scoter and Red-breasted Mergansers offshore. Red-crested Pochards and more Brambling were on the Meadow Trail.

After lunch at the cafe we drove along some of the back roads near Ringstead looking for Pink-footed Geese. We found a flock, but there were no interloping other species or neck-collared birds. Our final stop of the day was at Flitcham. For once the Little Owl was showing well from the bird hide, and another birder pointed out two Egyptian Goose goslings amongst the vegetation. We couldn't pick out any Tree Sparrows amongst a finch flock, but it was starting to rain so it seemed a good point to return home. 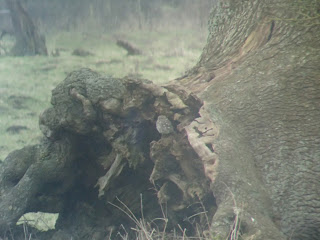