On Sunday I was at Whitlingham early to get the wildfowl count done. In addition to wanting to beat the crowds I also needed to be away before the football traffic built up, and also hoped that I might finally catch up with some migrating Bewick's Swans. I didn't think that the temperatures had dipped very low overnight, but the meadows were covered with frost and part of each broad was frozen. As the sun finally burst through a misty haze hung over the broad and picnic meadow, and the bird song was more reminiscent of an April morning. 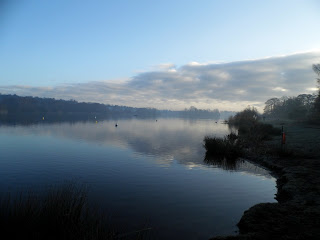 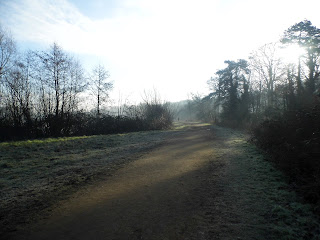 The number of birds on the Little Broad had decreased from my last visit, which was just as well as I was having to split my time between counting them, keeping an eye out for Water Rails and watching the Siskins feeding above my head. A pair of Shoveler remained at the east end of the broad. 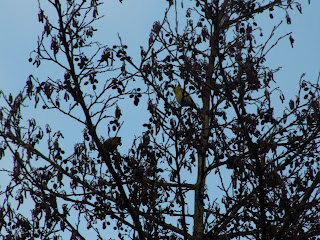 Moving across to the Great Broad I began by checking some loafing Black-headed Gulls for rings. I then moved on, taking less time than usual for this time of year because with the exception of the Tufted Ducks the numbers of everything else were low. A group of 25 Pochard were in the conservation area bay, along with six Little Grebes (a seventh was seen against the north shore of the broad). Despite the sunny spells there was no sign of the Bittern. As I completed my lap around the north shore three Egyptian Geese very tolerantly stood on different cut trunks of a large tree on the riverbank. On my way back I checked the gulls again and saw returning bird A341.