Norwich has a number of local nature reserves and green spaces, many of which are looked after by the Norwich Fringe Project. This excellent group of volunteers undertake a range of management work and if you have a bit of free time, or if you are looking to get some experience of conservation-related activities you could do far worse than getting in touch with them (web site here: https://norwichfringeproject.wordpress.com/). Some of the volunteers are also very good naturalists, and I tend to keep an eye on their blog to see what they find as they visit local sites. Last month I noticed a particular entry from Charter Wood, where someone had found Cobalt Crust. This is an attractive fungus that is rare in Norfolk, and as I'd never seen it, or been to Charter Wood, I decided to remedy this when I got the chance.

The first problem was a slightly embarrassing one - where exactly was Charter Wood? Despite living and birding around Norwich for many years, including one living at Three Score, I had never been, or seen signs to it. A google search returned few results, mainly just those referring to Fringe Project blogs or publicity. A map of sites on the Fringe Project website suggested that the woods were north of New Road, but I had walked that route before when I had a birdwatching permit for Bawburgh Lakes, and didn't remember any footpaths off it. The woods is also not named on Ordnance Survey maps of the area. Fortunately Robin Chittenden got in touch to say that he had helped plant the wood, and it is accessed via a nearby housing estate.

Having found out where the wood was, I still had a big problem - the Cobalt Crust was growing on a single branch. Whilst it is a bright colour, I only stood a reasonable chance of finding it if it was close to a main path. I got in touch with the Fringe Project, and fortunately one of the people involved is Michelle Hoare, a member of the fungus study group. She hadn't seen the fungus herself, but kindly got in touch with some of the volunteers from that day and got back to me with a grid reference. My chances had increased, although the time difference (it was seen in early February) was a concern, as the colour fades with time and of course the branch could have been moved.

On Sunday I arrived at the nearby housing estate, and found the path in without any problems. It wasn't marked, but I could see dog walkers in the distance, and it transpired that the site is quite well used by locals. An information board explained that the land was privately owned by a Jersey-based company, but access was allowed subject to various conditions. 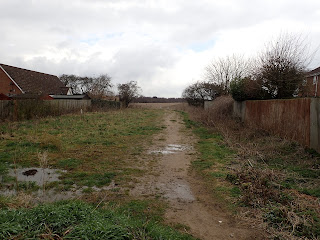 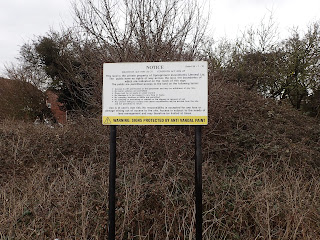 The composition of the site was a bit of a surprise to me. There was a strip of undulating grassland with a large gorsey area, some maize fields compelte with singing Skylarks, and then the youngish woodland that I had come to visit. I thought that later in the year when more flowers and insects were out it could be a rather interesting and productive site, at least a bit different to the other places Norwich has to offer (thinking about it there is a bit of a similarity to Lusty Hills at UEA, but that has less general access). 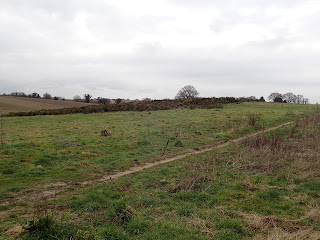 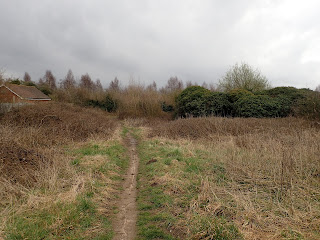 I heade for the woodland, taking in a ruined building on my way. I walked through a recently coppiced area, which brought home the sheer folly of looking for a single big stick in this large mass of young trees. It was drizzling, but I picked out a few bits of interest, mostly fungi, including Jelly Ear, Hairy Curtain Crust, Waxy Crust and Winter Polypores. 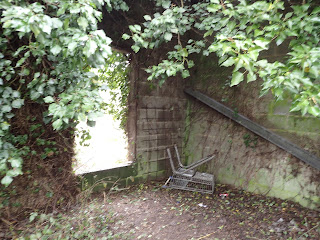 I'm sure there is a good reason why there is a shopping trolley there. 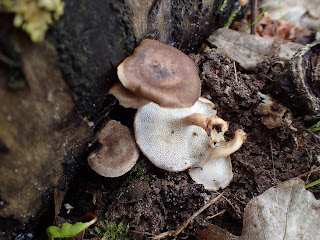 Winter polypores - from above they look like a typical gilled species, but turning one over you can see the pores.

I found my way to a clearing at the edge of the wood where some recent planting had taken place and began to search for the Cobalt Crust. The hum of the A47 traffic could be heard in the distance, intermingled with Skylark song and repeated shouts of "RORY!" coming from someone with a rather loose concept of keeping your dog under control. I had found many, many stick and branches, but sadly none containing the fungus that I was looking for.  The drizzle had gone, but I was aware that Cathy and Rose were waiting for me at home, so I took a different path back through the wood, aiming to cover as much ground as possible on my way back.

Noticing a Holly tree I went over and recorded Phytomyza ilicis, the holly leaf miner, and indeed I stopped at the layby near Earlham church & marshes on the way home and recorded it there too, adding another two 2km squares to the maps in my previous blog post. I noticed some unusual galls on a young Oak, resembling ridged barnacles. At home I identified the causer as Andricus testaceipes, although apparently there is a bit of taxonomic uncertainty and name changing around the species so it is currently more often known as Andricus sieboldi. I saw my first flowering Coltsfoot of the year, and it was nice to see a few bumblebees about too, including a confiding Early Bumblebee (Bombus pratorum). 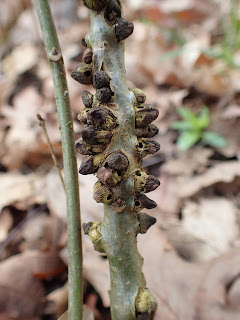 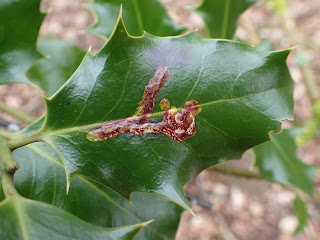 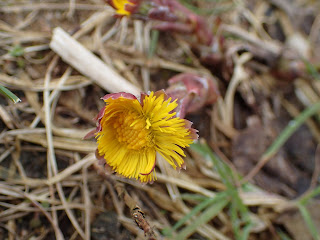 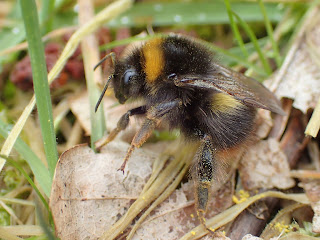 A nominal unsuccessful visit in that I failed to see my target species, but considering the benefits of being out of the house, visiting a new site, seeing a new gall and generating some biological records, it was actually a rather productive couple of hours.
Posted by James Emerson