I thought of quite a lot of "swift" puns for the title, but decided to spare everyone.

26th March 2010
After spending quite a bit of time birding locally recently, I took up Neil's offer of a lift to Cromer to have a look for the Alpine Swift after work. Our plan was to park in town and walk up to the lighthouse, where if nothing else we could have a panoramic view of the surrounding area. As we walked along the footpath past the public gardens we were told the swift had flown east from the town ten minutes ago. We felt positive (it was in the area) rather than negative that it may have flown straight through. We hadn't left the houses before we saw the Alpine Swift flying over the roofs (rooves? What is the plural of roof?). Stopping at the entrance to the little wood, we got crippling views as the swift flew over wood, sea, against blue sky and cloud, and on several occasions close overhead. The large size and white underparts were clear at distance, but the best part was the shear manoueverability of the bird. If it had been roosting in sight on the church tower I may have missed this, and that would have been a travesty.
. 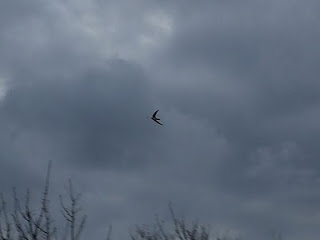