After a night out for Gary's birthday (at the aptly named Black Swan), I had a late start to the day. Crossing the railway line to Station Marsh/Thorpe Broad a male Reed Bunting was singing from a willow tree. The Broad itself was fairly unproductive, a couple of Little Grebes and some Teal were worth a look. Some gulls were loafing on the spit, along with up to five Oystercatchers and c40 Lapwing. We abandoned the walk across the marsh to the north side, as the mud looked rather deep. I scanned the marshy pools from the cattle compound, but still no sign of any Garganey or waders.
Sunday was mostly taken up with Mother's Day stuff, but I managed to get an hour and a half at Whitlingham before dusk. Earlier in the day Andy Musgrove had a Bittern and someone also found a Mandarin, so it was rather frustrating to find bugger all over the first majority of the broad. I had almost got to the Watersports Centre when the distinctive shape of a Mandarin swam into view. I sat on a bench and watched as it swam around, eventually coming up onto the edge to feed. A patch tick, now for that Garganey... 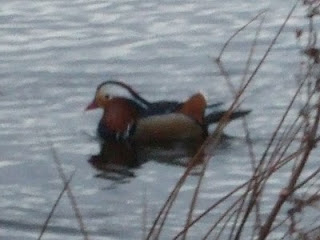 A Mandarin in poor light