21st March 2010
A day out with Cathy, trying to find her a first Brambling before the meagre amount we do have leaves. Before we left we spent an hour or so listening to the trilling Waxwings in a nearby tree. I don't know why they need to eat at all, all they do is just sit in a tree calling for 95% of the time. After this we went to Sculthorpe Moor, where almost every waterbody was full of spawning frogs. Their loud croaking joined together to make a constant buzzing noise, which a few non-country folk even thought was machinery in the distance. 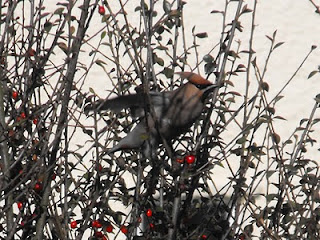 Sitting in the Frank Jarvis Hide we eventually saw our target bird, with a pair of Brambling alternating on one of the feeders. One of the Golden Pheasants dashed manically from a holly bush, at least they're trying to look wild now. Scarlet Elf Cup fungius was scattered through the wet woods, and two Roe Deer were foraging at the woodland edge. The Whitley Hide gave us nice views of 2 Water Rails, a pair of Bullfinches and a Buzzard. On the way to the far hide we had to avoid stepping on toads, who had evidently claimed one pond for their own. Amusingly we watched as oversexed frogs jumped on the backs of toads, evidently unconcerned as to what they were trying to mate with.
. 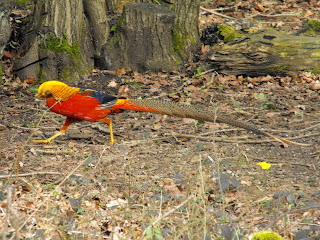 If you look at the manic expression, it is quite reminiscent of the creature from "Alien" 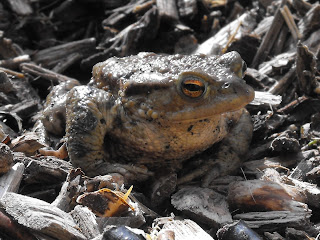 Fed up of being humped by frogs