I decided against going to the coast today, mostly on the basis of rain being forecast, but also in the hope of finally getting a migrant at Whitlingham. Before I set out Cathy called to say she had 5 Waxwings in her garden, a reminder that there were still plenty of winter species I need on my patch list this year. Walking down Whitlingham Lane it became evident there was a canoe event on, making the park even busier than a usual weekend. Lingering amongst the Little Broad alders we spent some time watching a Lesser Redpoll. This proved useful further along, when we located a Mealy Redpoll further along and were able to have an almost direct comparison between species.
.
Wildfowl numbers low, mostly Tufted Ducks and c12 Pochard. A couple of sinensis Cormorants shared the posts with 3 Lesser Black Backed Gulls. Along the south edge of the broad we finally located a Chiffchaff. It declined to call, but allowed decent views in the pathside willows, showing fresh yellowy-green tones to the plumage. We located a second near the carpark, this one a shade less yellow, and also not singing. My first butterfly of the year was a ragged looking Small Tortoiseshell, and a lone Redwing was feeding opposite the carpark. An unfamiliar goose call had me puzzled until I saw that the little hybrid goose had flown in. I don't think I've ever contemplated what a hybrid bird sounds like, maybe I'll have to research that. 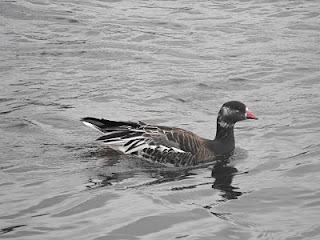 Cute but screechy
.
A second call of the day told me the waxwings had returned, so I went round to Cath's to have a look before the rain set in. This one was particularly curious about my presence. 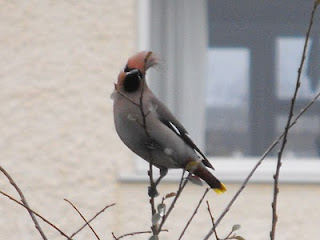