7th March 2010
.
After two months we finally got a nice bright day, and accordingly me & dad decided to go for some low intensity birding in North Norfolk. We spent an hour in the hide at Flitcham, seeing my first Little Owl of the year. It's place in the tree roots seemed to have been taken by a prospecting Stock Dove. The Greylag Goose scaring doesn't seem to have had much effect, there were loads still, and we also saw a covey of Grey Partridges and a Buzzard on the hedge between the far fields.
.
On to Titchwell for some hot food. Avocet and Stonechat were firsts for the year, and no amount of scanning could produce any Twite, I probably haven't seen any for over two years now. A big raft of scoter were offshore, along with decent numbers of Goldeneye. A pair of Black-tailed Godwits were either mating or trying to drown the other bird. My highlight of the visit was the scrum to see a Woodcock near the visitors centre. Once it emerged how far in the bird was, I decided it wasn't worth waiting to get a glimpse, but some of my favourite comments included "is it what I'm looking at now?" and "is that it? Oh no, hang on, it's a Chaffinch" Good stuff.
.
We stopped at a site for Dartford Warbler on the way home, but didn't manage so much as a Stonechat. The nice weather had understandably brought out other birders and dog walkers, so it wasn't that much of a surprise. Last site of the day was my old stomping ground of Holt Lowes, where despite the growing shadows we found two Adders basking near the path.
. 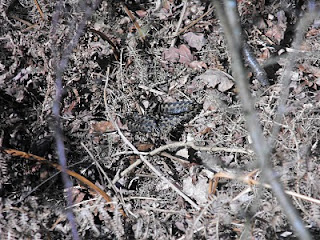