I went out for a jaunt around Norfolk with Gary & his dad, intending to look for the Great White Egret and then make our way up to the North Norfolk coast. In half-hour or so at Marlingford there was no sign of the egret, although we did hear a Grey Wagtail at Marlingford Mill and watched Buzzards displaying over a local woods. Our dip-fest continued by not seeing two species of owl and not seeing Woodlarks. "Surely that isn't going to be the highlight?" was the groan as we came away from the first three hours birding with distant views of a Stonechat.

We reached Titchwell and sprinted for the food hatch, Gary being the winner of the one sausage roll, whilst the losers received the Cornish Pasties. Presumably we can't call these Cornish pasties anymore, as they now have some sort of European regional protection. Anyway, by the time Phil got to the hatch there was no pastry-based products of any description. On the beach we walked along towards Thornham to get level with the scoter flock. No sign of any Velvets, but we did see a small flock of Eider and two Red-necked Grebes. A flock of Snow Buntings flew over our heads and we were stalked by two Black-headed Gulls.

Other stuff at Titchwell included Twite, Water Pipit and Water Rails. Beginning our way back to Norwich we stopped at Choseley, where we were serenaded by the jingling song of Corn Buntings, which was lovely. Back at Marlingford, looking at the same field as before, the Great White Egret was bang in the middle of it. We blinked and it had gone, hidden in a sttep-banked bit of river. Blinking again it was back, staying in view for about five minutes before vanishing behind a clump of Alders. We lingered a while, but it seemed content behind its trees so we headed back to Norwich. 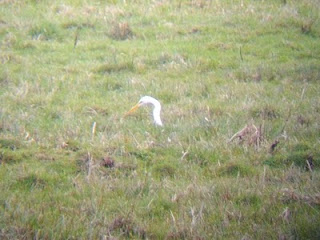