Last weeks fence around the Little Broad, which I presumed would be to create a separate area on the north shore for use by educational bodies, has in fact been extended all the way around the east shore of broad. Suggestions that the fence is only a temporary measure until an 8ft tall brick wall can be built were denied by an imaginary Broads Authority spokesman. A Black Swan resting on the small sliver of mud within the fence gave it that wildfowl collection feeling. Of more interest was a hybrid Wigeon x Gadwall (initially seen by David Norgate a couple of weeks ago) along the far shore. It stayed along the far shore, but patience paid off as a couple of hours later it swam within photographic range. 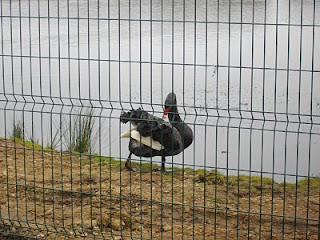 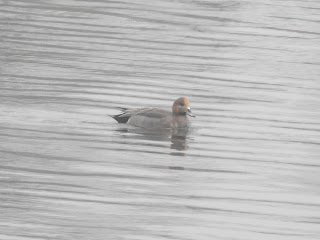 Gageon or Wigwall? I can't decide what sounds least stupid.

Walking around the Great Broad it was evident that the drizzle was keeping people away (the exception being the model yachters, but they were having a race from the bank rather than roping off the slipway). Looking over onto Thorpe Broad I saw my first Whitlingham Oystercatcher of the year, it appears that there has been a decent move inland over the past week as I also saw some at Marlingford and Flitcham on Sunday. Birds of the day were two redhead Goosanders in the conservation area bay. Another year patch tick, although they have presumably been at Whitlingham since Monday when Adam saw two there. 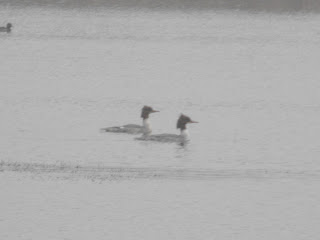