15th February 2012
Another visit to Whitlingham this morning in the drizzle.  Level with the island I saw two adult male Goldeneye, making a nice contrast with the rather scruffy 1st-winters that have been present the past few weeks.  Past the island a redhead Goosander, presumably the same one I saw at Thorpe yesterday, was swimming past a group of Tufted Duck.  Just like yesterday I momentarily looked away and it had disappeared into the ether.  Not much going on in the conservation area, but I found a big mutilated fish on the riverbank path (if anyone can tell me what it is or what killed it then please leave a comment).  Further round I found the two Smew that were reported yesterday swimming past a raft of Common Gulls.  As the rain started up again I checked the treetops for Mistle Thrushes (one of the old country names is "Storm cock" after its habit of sitting at the top of trees singing during storms) but it obviously wasn't stormy enough.  Finally before leaving I scanned the broad again and found a third Smew, matching my highest count from Feb 2010. 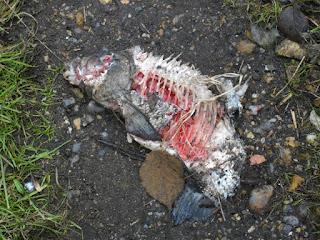 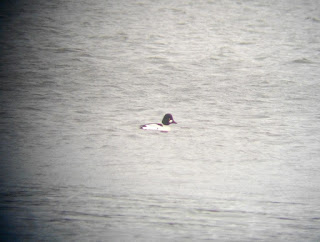 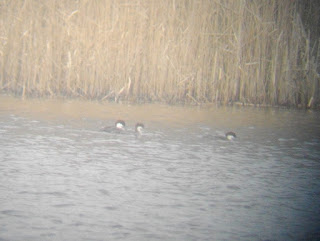