31st March 2012
Today's Whitlingham visit had three main targets; find a Garganey, catch up with a migrating Red Kite or beat one of my earliest dates for something like Sedge or Reed Warbler.  As it happened I didn't succeed with any of these, but it was still an excellent visit.  The first brood of Egyptian Geese were at the west end of the Great Broad.  There were eight goslings, although experience suggests that only four or five of these will reach adulthood.  The weather was very changeable, and I got wet whilst watching them as a brief shower went over.  I checked a stand of trees that usually host the first returning Willow Warbler, but it has not yet arrived. Nearby I heard a Bullfinch call, but this species still eludes me here this year.
After a scan of the conservation area bay I checked the posts, and to my surprise picked out a Caspian Gull.  Having taken a record shot I got out my notebook, sketched an outline, looked up and it was gone. As soon as I got my camera out the bird had refused to turn properly side on, but you can get an impression of the long beak, small eye, sloping forehead and leggy look from this picture.  I have packed away my "Gulls.." book so I can't double-check, but from the dark mark coming up from the gonys angle and a few brownish feathers I think its a 3rd-winter bird. 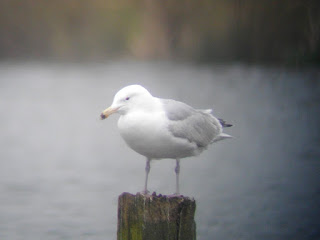 After waiting to see if the gull would return, I continued around the broad and scanned over to Thorpe, seeing nothing of interest.  I went up into the woods to look down onto Thorpe Marshes to look for LRPs, but only saw a couple of Pied Wagtails and some Stock Doves.  On my way back along the south shore I saw the Caspian Gull had returned to the area around the posts, along with several Lesser Black-backed Gulls and two Common Gulls.
Posted by James Emerson