24th March 2012
Whitlingham gets particularly busy on sunny days, so I went to Thorpe to get a quieter walk.  I finally saw my first butterfly of the year, with a Comma sunning itself on Whitlingham Lane (not to be confused with the road to the CP of the same name).  Chiffchaffs were singing loudly, I saw one in trees just over the railway footbridge and heard at least six more.  I sat at the cattle compound and scanned for Little Ringed Plovers, but without success.  After a while I continued my walk, flushing a Meadow Pipit from the marsh near the path.  On the broad a Goldeneye was still present, along with a Gadwall and a pair of Teal.  Six Snipe were in vegetation on the shingle spit, although the heat haze joined two together to make an uber-Snipe.  Further round were some bathing Jackdaws and a pair of Oystercatchers.  Following my circuit I went back to the cattle compound to have another look for the LRPs, but there was still no sign of them. 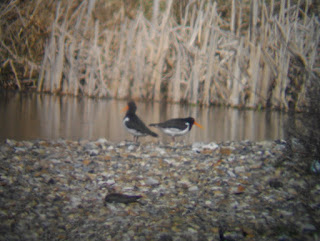