3rd March 2012
A visit to Marlingford Mill produced a good range of species late morning.  When we arrived the American Wigeon was out of sight in the river, but eventually it did work its way back up the bank, to start with just as a head visible above the grass, then finally the whole bird in front of the alders.  Whilst waiting I found a Kingfisher along the river, a pair of Grey Wagtails hopped about on shingle in the channel and a Nuthatch flew onto a nearby tree.  Earlier a Little Egret had been sat at the top of a tree, and a small group of Egyptian Geese were feeding on the marshes.
We proceeded onto Sculthorpe Moor, where we spent a very pleasant couple of hours.  Marsh Tits were calling from several areas of the wet woodland, and a Treecreeper worked its way up a tree near the path.  Walking along the river Cathy found a Toad, which was making a squeaking noise, something that I can't remember ever hearing before.  Further along we found many more that were also making this noise.  From the Whitley Hide we admired a pair of Bullfinches and saw a Field Vole beneath one of the bird tables.  A period of sunshine brought four Buzzards soaring up over the far hide.  On our way back we saw more Toads, another vole and lots of Scarlet Elf Cup fungus. 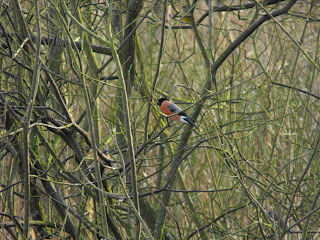 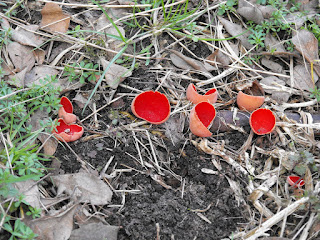