22nd March 2012
Another after work trip saw us connect with the four Glossy Ibis at the second attempt, and well worth the trip they were too.  Unfortunately from a photography point of view we were looking west into the hazy sunshine (excuse for bad photographs #52 I believe), but they are recognisable from this record shot. There are loads of good photos of them out on the internet if you're interested, for example Carl's ones here.  Also present were loads of Wigeon and Curlews, and a few Teal.  In a bush right next to the path a Cetti's Warbler made a noise like it was having a breakdown, and then flew into the next bush. 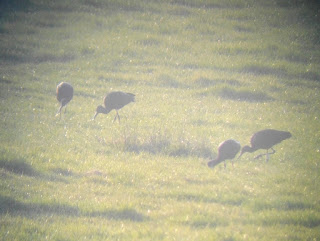